What does it take to get the greatest downhill mountain biker of all time to do an interview with Morzine Source Magazine? Not much as it happens. You see, Morzine occupies a soft spot in Greg Minnaar’s heart. Plus, Santa Cruz team manager Kathy Sessler is not the kind of girl you say no to.

Born in Pietermaritzburg, South Africa in 1981, Greg’s fascination with two wheels commenced on a BMX, aged four. Eleven years as a motocross racer followed before his parents bought a bike shop.  He made his professional downhill debut aged 19 and has spent two decades at the very top of his game to become the most decorated downhiller in history.

Let’s kick things off with Greg’s fondness for Morzine. “Oh I do enjoy Morzine town!” he tells Source. “One of my favourite runs is a variation off Pleney main line. The riding is endless and there’s a great combination between natural and bike park, trail and road riding”. 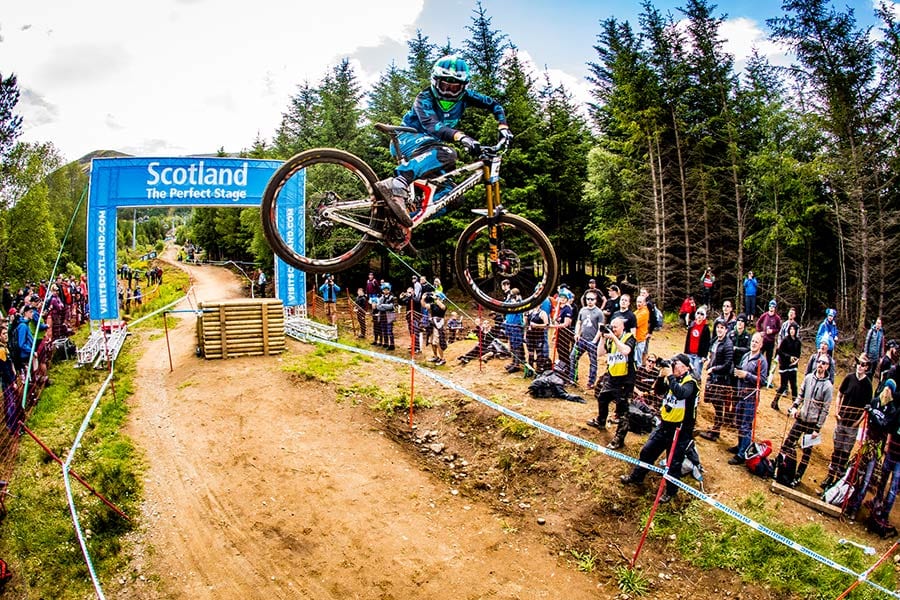 As of July 2017, Greg had achieved 75 downhill World Cup podiums, more than any other racer in history. The 2018 season is approaching, is Greg ready? “I’m so keen to get this season rolling. I love racing and it’s been way too long since we last raced. There isn’t a track or a venue on the tour that I don’t like; each is unique in its own way.”

Greg is known for being obsessed with detail. After all, the finest detail can have the greatest outcome in a sport where every tenth of a second counts. Aside from the physicality involved in downhill racing, we’re keen to know how the mental side of things plays out. “They both work hand in hand. When you’re strong your confidence is higher and you ride faster. You really can’t be one without the other.” But after two decades as a professional racer, surely you have nerves of steel? “Nope, not at all! I still get nervous before a race. There’s nothing that I do in a race that hasn’t been carefully thought through or calculated. But I’m definitely not fearless.”

Imagine how difficult it must be for such a decorated athlete in any field to call their greatest achievement. Greg first became downhill World Champion in Lugano, Switzerland in 2003, aged just 21. It was another nine seasons before he regained the title, becoming the only athlete in history to become World Champion in two successive seasons (2012 and 2013 in case your memory fails you). “Winning the World Championships in 2013 in my home town has to be one of my most memorable races. Off the bike, for me, it’s all about family and friends, so they’re probably my greatest achievement of all.” 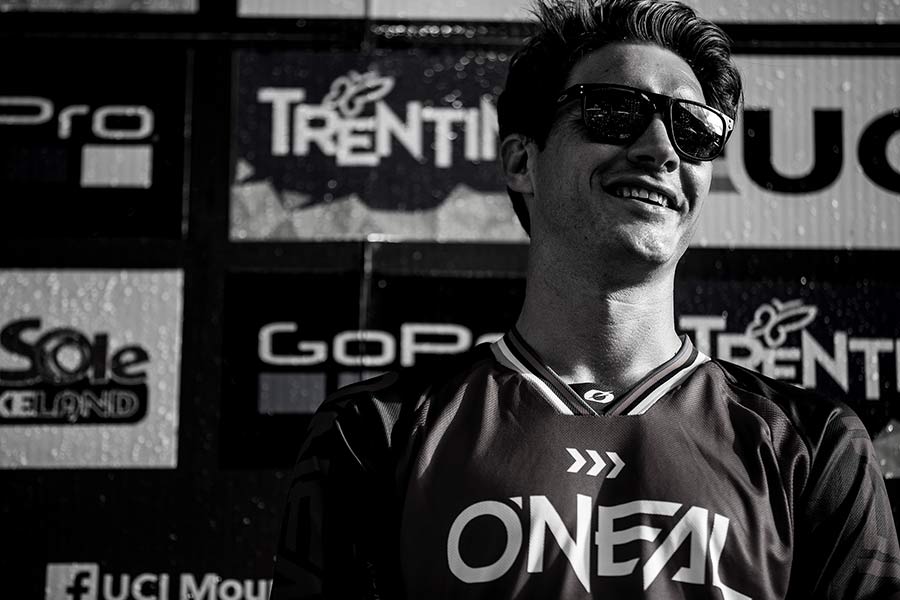 “Off the bike, for me, it’s all about family and friends.” Image: Sven Martin

Greg joined the Santa Cruz Syndicate team in 2008, taking his well-earned place alongside a collection of prolific riders that, at the time, included Steve Peat, Nathan Rennie and Josh Bryceland. This season’s Syndicate team includes young guns Luca Shaw and Loris Verger. Together they’ll race the best and most challenging trails in the world. Where would Greg ride out of choice? “My top three riding destinations are Vallnord, Morzine and Mont-Sainte-Anne.” And who’d be your ultimate riding crew? “The Syndicate has been my crew for the last ten years. I wouldn’t change it, but I’d add some of my boys from SA. And maybe Roskopp (Santa Cruz co-founder and CEO Rob Roskopp) if he got into better shape!”

Extensive travel is part and parcel of the World Cup season. The 2018 calendar features races in Lošinj, Croatia, Fort William, Scotland and Mont-Sainte-Anne, Canada to name just a few. How does Greg manage to stay relaxed while moving between so many different time zones? “Honestly, it’s hard. Getting out and doing something off my bike helps me to relax, whether it’s golf or surfing. They are my favourite ways to chill! The travel part; there really is no other option but to suck it up and deal with it.”

Widely considered as the world’s best racer, it’s difficult to imagine that Greg might have any regrets when it comes to his career. “Everything would have been easier with hindsight,” he tells Source. “But I don’t regret anything. I just learn from my mistakes.” 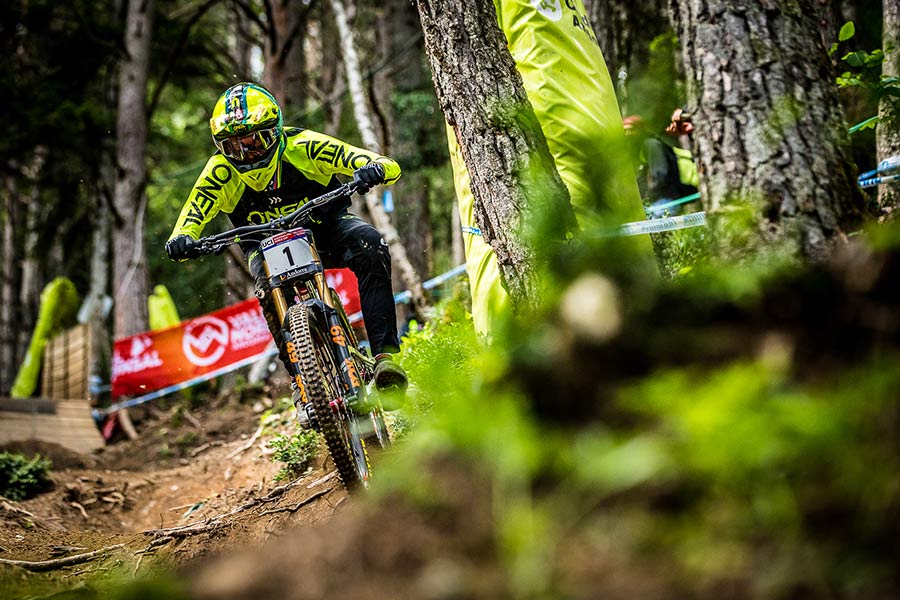 Returning for a moment to Loris and Luca, the new generation of the Syndicate. What words of wisdom do you share with them? “Downhill mountain biking isn’t an easy sport when you’re starting out. You need to find a balance between giving it your all and having fun at the same time. Today’s the youngest you’ll ever be…” Profound words indeed from the 36 year old.

There are ten World Championship medals hanging on Greg’s wall, spanning the 2001 to 2015 downhill seasons and he’s the only man to have 22 World Cup downhill race wins to his name. For how many more seasons can Greg Minnaar compete? What’s the exit plan? “Exit plan!!!??? What are you trying to say Morzine Source Magazine?” Only that no one is getting any younger around here. And as an athlete obsessed with detail, you must have a plan in place? “I think this has to be one of the hardest thoughts as a professional, especially since this is all I’ve done since I was 16 years old” explains a very honest and humble Greg. “But I don’t see retiring from professional competition as an exit, more of a transition. I’ve made sure for some time now that I’ve involved myself in various businesses, “ Greg Minnaar Cycles in Pietermartizburg, SA being just one example. “This does make my life a little busier than most of the other riders, but I think it’ll make the transition easier when the time comes.”

And when that time does come, where will we find you? “Hanging with my mates, riding motocross, surfing, on the golf course and of course Braaing. Google it.”

To find out more about Greg Minnaar, check out his website, follow him on Instagram or discover what he’s been up to with the Santa Cruz Syndicate HERE.