Here follows a lesson in how a true professional can dominate a sport while still being a really nice guy.

Born in Sheffield in 1974, Steve Peat started riding bikes aged three, chasing down his two older brothers. World Cup Championship success on two wheels arrived in 2002, 2004 and for a third time in 2006; it was in this year that Peaty joined the famed Santa Cruz Syndicate race team. But would he ever win that elusive World Championship title? Only time would tell.

Peaty finished the 2009 downhill mountain bike season as the most successful male racer ever, by number of World Cup wins at the time. He was also crowned World Champion. At 35 years of age, his success was unprecedented and it was a dream some thought would never come true for Peaty, who finally retired at the end of the 2016 race season. Since then he’s had plenty of time to reflect on a career as one of the sports most loved figures; one which also included nine British Championship titles, 17 World Cup wins, 52 World Cup podiums and a legendary ability to party all night long.

Retirement didn’t conclude Peaty’s place on the Santa Cruz Syndicate. His official title is now ‘Race Support,’ but you just know he’s playing a much bigger role in mentoring three-times World Champion Greg Minnaar and Junior World Champion Loris Vergier, both on and off the track. 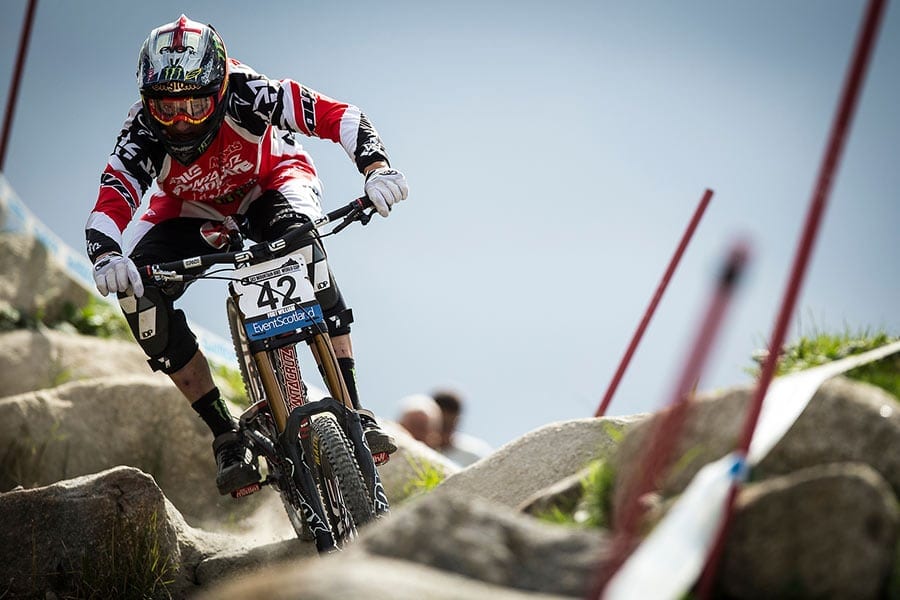 Peaty, how are you finding life after competing at the highest level? Is your body thanking you yet?

The body is certainly not thanking me!!! Once you slow down a little you start to feel all the aches and pains. I need to keep moving, training and riding so the body can keep going. The transition from full time racer is quite a tough one; it’s hard on the mind to find things to replace what I had been doing for so many years of my life.

Have you discovered a newfound love for riding bikes since retiring?

It’s not a newfound love, the love has always been there, but there is certainly a different urgency to what and when I ride. The purpose for the ride has changed for me, but love is still there and always will be.

Who were your idols while growing up?

I think when I first got in to MTBs, some of the early XC UK guys like David Baker and Tim Gould were idols of mine. I soon moved on to John Tomac and Jason McCroy and to me these guys just oozed style, were winning races and were very nice people too, not arrogant in anyway and down to Earth. I was also in to Motorcross and Supercross for years, and my idol from those sports was Jeremy McGrath. I was fortunate enough to meet and hang out with Jeremy quite a few times and it always blew me away how easy going he was and how much time he had for his fans. I tried to follow his lead in my career after this. 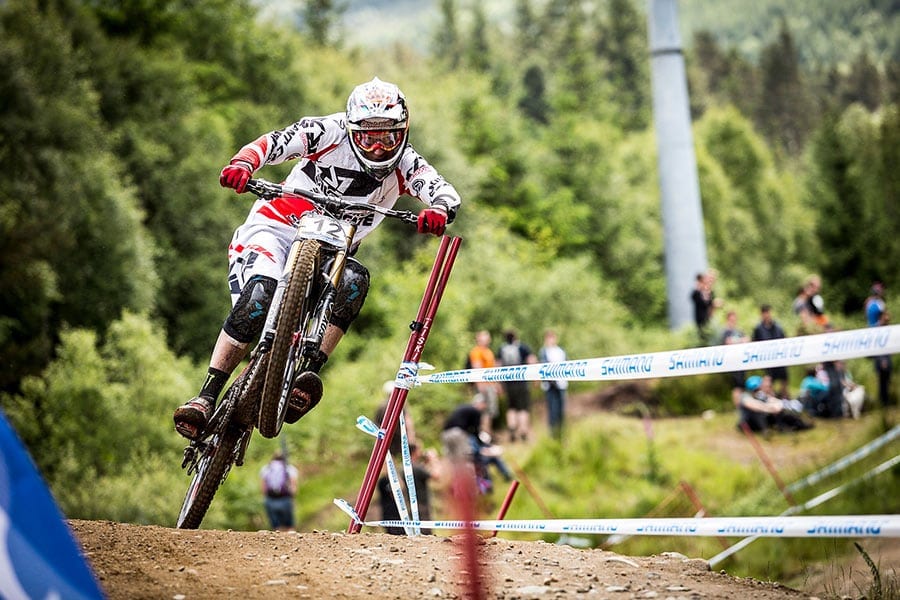 The World Cup scene is renowned for its parties and you have been at the centre of many of these. Which stage generally threw down the best parties?

There are many stories. We’re a fun bunch and we like to let loose after the pressures of racing build up over a weekend. The stories make themselves in each venue. I think some of my favourite times were with Shaun Palmer, Kirt Vories and Rob Warner back in the day. Stuff would go down back then that you wouldn’t get away with now!!! Palmer always said “as long as you’re prepared to pay for any damages caused, you can’t really get in trouble.” He paid out more than most though.

You’ve been a mentor for many a young rider, including the likes of Josh Bryceland and Brendan Fairclough. Who should we be keeping an eye out for in the future?

Damm, tough question these days. There are so many little rippers popping up all over the world. Our current crop of young guys like Finn Iles and Matt Walker are now first year seniors and I think they will be a force in this year. As for younger guys, it’s so hard to pick, every team in the pits is jumping on the bandwagon and trying their luck with kids. Its kind of annoying as the kids now expect everything for nothing and are almost spoilt because these teams are just tying their luck. Bit of a cliché, but I believe the kids need to earn their rides more; this will set them up better for years to come.

What’s the biggest change you’ve seen in mountain biking since you started out?

The biggest change is just the progression! The bikes, the athletes and the speed. We are all so competitive that we keep pushing on, it’s quite a natural thing and makes me realise just how hard it is when you’re not in the middle of it all. It’s always been tough to say one single thing that has made a huge difference, mainly because I feel like it is a package of all the aspects progressing together. It’s a constant rolling big changing beast. 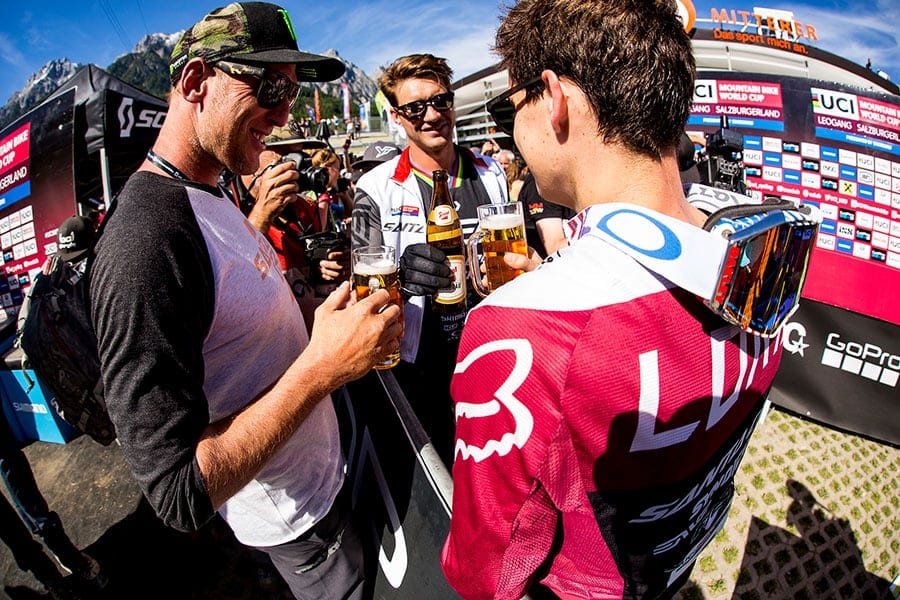 How did you manage to keep competing at such a high level for such a long time?

This is something I get asked a lot, and to be honest I think the truth to it is that I enjoyed what I was doing, always changing things up and enjoying the moment. If I had a bad result, I could move on quickly and refocus on the next race. I have always been surrounded by great people, who also helped with this fun vibe while getting the job done.

Did you ever fall out of love with riding your bike whilst competing?

Never while competing. I think the competition is what fed me the most, I love every aspect of a race weekend. Meeting people, learning the track, getting up to speed, the noise and the crowds and the pressure, its all makes you want more. Maybe I fell out with it a little after I stopped racing World Cups and didn’t need to do it in the same way, but I still had fun while on the bike.

As a professional athlete, you need to have a competitive nature. Does this carry through to everyday life and to what extreme?

Yes I am pretty competitive! I reckon I went a good few years winning shotgun whenever we got in a car. I also grew up with two older brothers, who I had to follow around on bikes from a very young age. Trying to keep up with them and compete with them when they were older, bigger and stronger than me definitely set me up to be competitive in life. 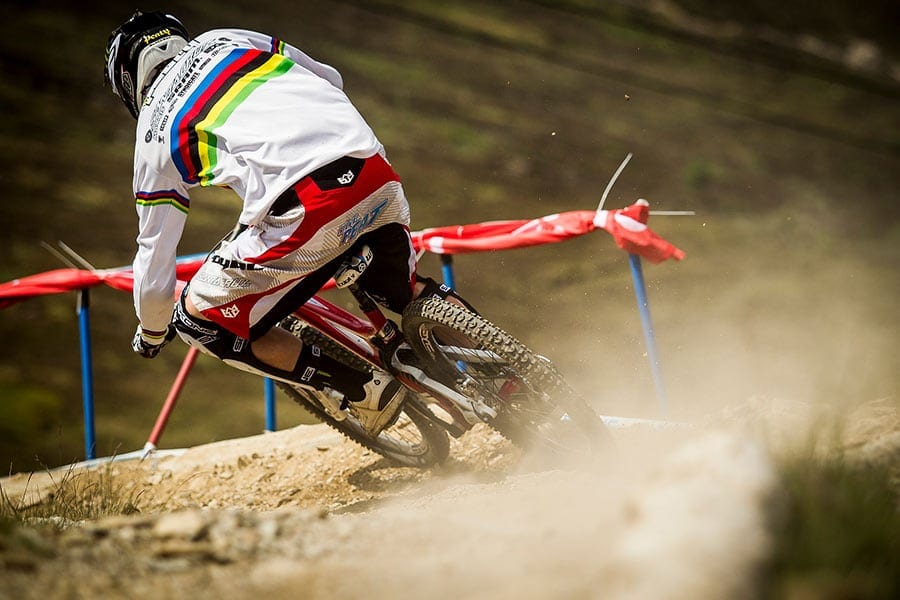 If you could only ever ride one spot, where would it be and why?

Hmmmmm, through my career I’ve had many different spots that I love to ride but I have always returned back to my local trails in Sheffield. Wharncliffe Woods is the spot and to ride there with all my friends is a great feeling and very fun. More recently I have had chance to spend more time here in Morzine, riding with friends and also my kids. It could well be my new favourite!!!

It would be great to see a World Cup return to Morzine at some point. Do you see this as a natural progression after the French Nationals this summer?

I would love to say that is the natural progression, but you never know! The valley certainly has the terrain to have an awesome World Cup track and all the infrastructure is in place. Fingers crossed on this one. I would love to help out and give advice to make an awesome track. 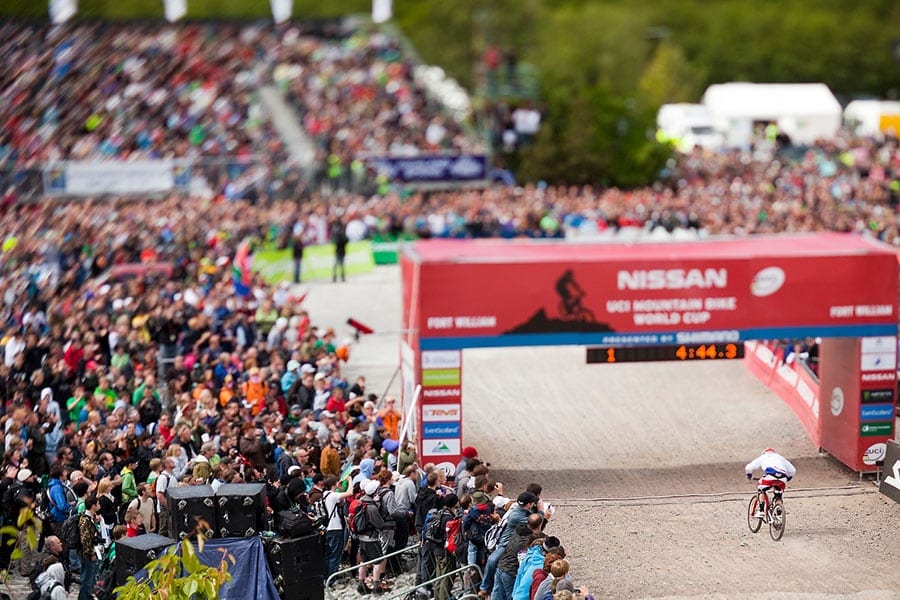 Les Gets will no doubt hold some fond memories for you after your win in 2002. Any tales to tell?

Ha ha, as with any race win, the after party is always the one that stands out. We had a big session with JM in the Boomerang and then moved the party into town. Some of my friends rented a place and were partying on their balcony, it got a bit rowdy and a flower fight started, there were people (French and English) ripping the flowers out of the beds on the ground and throwing them up at my mates, it went on for a while and was very messy! Lets just say it took my mates a while to get their passports back after that one.

Having Santa Cruz base their European HQ in Morzine is great for our area. Do you think this will help to better develop the Pleney?

Yes, it’s great to have a European base here now and I will certainly be spending a good amount of time riding this area. Santa Cruz are a forward thinking company and know how much the trails and riding means to people. The Pleney is already awesome and will benefit from anything we can do with Santa Cruz to improve the experience for riders. I have many friends in Morzine and would love to get involved with ideas for trails or even events. Watch this space, I guess!

As well as acting as Race Support for the Santa Cruz Syndicate, you can also find Peaty putting his years of experience into his own range of bike care products. Check out the Peaty’s website HERE.